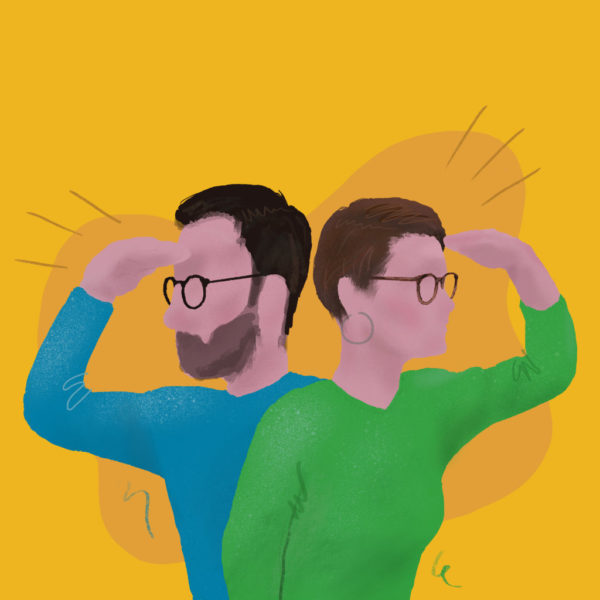 A podcast about building a better tomorrow, today.

At the close of our first season, we thought it would be nice to have a quick recap of the past episodes with some updates. We also answer a few questions from listeners, and we briefly look into the future of what’s in store for Tomorrow People.

🎵 All music by Lennart Schoors, except:
Soft and Furious – When you are all over my body
Lee Rosevere – Try Anything Once

Mei Van Walleghem: Today’s format will be a bit different from what you’re used to. To wrap up this season we’ll do a quick recap of past episodes with some updates, we’ll answer a few questions from listeners, and we’ll briefly look into the future of Tomorrow People. So let’s jump right in. Listener Gianna from Italy sent in a couple of questions that basically boil down to: what’s our origin story? Care to elaborate, Lennart?

Lennart Schoors: Uh sure, where should I start? I think I will start with me working for 13 years as a web designer, and I kind of got fed up with it. It was time to move on, time for something else. And it was around that time that I had this realisation, that if you look at the news on tv, if you read newspapers… I’m not gonna say it’s all negative and depressing, but there are quite a few pressing issues in the world. And some of the ways we’re currently running this world are just not sustainable. And on the other hand, if you look a little further, there’s lots of people working hard on a better tomorrow. They’re tackling today’s challenges, they’re doing great work behind the scenes. Because a lot of that work is not that newsworthy, in a traditional sense. But personally, I felt that these stories – they deserve to be told.

Mei: Exactly. I remember having endless conversations with you, talking about the latest people or projects that caught our attention, sometimes even venting about a multitude of topics. My background, on the other hand, in journalism pretty much turned me off of the regular news cycle and I quickly started curating what I myself find newsworthy, for my own sanity, basically. For our listeners, Lennart and I actually met working at a radio station many years ago and we’ve worked on plenty of projects since. You could say radio was our first love, so our conversations naturally evolved into a podcast idea. With a whole list of topics in mind, we started Tomorrow People together.

Lennart: So yeah, that’s basically how Tomorrow People got started.

Lennart: For this season, we kicked off with our look at the shift in urban mobility, towards bicycles and micromobility, in episode one. We interviewed Mikael Colville-Andersen, founder of Copenhagenize Design Company. But that interview was recorded back in September last year, and he is no longer CEO there. He’s now focusing on writing, giving talks and his TV series on urbanism. And you know who replaced him?

Lennart: It’s Morten Kabell, who was Copenhagen’s Technical and Environmental Mayor, and who we interviewed in episode 5, when we asked him about the water quality of the Copenhagen harbour. So we’ve kind of come full circle there.

Mei: And in our second episode focused on Forward Fashion, where we mentioned the deal Orange Fiber signed with H&M. Céline from Quebec in Canada reached out to us because she went looking for them in stores, and couldn’t find any of the clothes made with Orange Fiber. But they were so succesful – ‘cause I looked into it – that they sold out within days, so no use of searching for them in stores. On the other hand, I did run into some items made from Piñatex. It’s a leather alternative we also briefly mentioned. And those are still available.

Lennart: Cool. Then, in episode three we went looking for unusual places to grow food, and you may recall we visited the rooftop farm Dakakker in Rotterdam in winter, when it was … you know, it wasn’t barren, but there wasn’t growing that much at that time of the year. But I just looked on their Instagram and things are looking lovely now in summer. Plenty of edible flowers and veggies.

Mei: Maybe well worth another visit then.

Mei: Episode 4 was all about the future of old and new religious buildings, and one thing I remember particularly from that episode is that Russian violinist who plays his protest songs every day in front of the church. He doesn’t want to see it converted into a grocery store. And I was wondering Lennart, is he still at it?

Mei: And then there was episode 5, Blue Space, about rediscovering the potential of water in our cities. You may remember that we talked with Paul Steinbrück from Pool Is Cool about outdoor swimming in Brussels, the capital of Belgium. Well, we did that interview last winter, and a lot has happened since. Listener Bram who lives in Brussels emailed us about this. He says: “I’ve read in local papers that the new city council has plans for open air swimming now. Maybe you could ask Pool Is Cool for some more info on that?”

Lennart: Yeah good idea, let’s do that, let’s give him a call.

Lennart: So Paul, it seems quite a few things have happened since we last spoke?

Paul Steinbrück: Indeed, indeed. Time has passed, summer is here. So, after the elections there’s a new city council with a new majority. And in the new majority agreement they wrote that they want to build a naturally clean, outdoor swimming pool. And we’re looking forward to be involved in one way or the other.

Lennart: Nice. So that’s something very nice to look forward to for the future, but you have a project for this summer as well, right?

Paul: Indeed, Expedition Swim is a test to try swimming in the existing waters of Brussels. And we worked together with the Brussels environmental agency and selected three ponds in which we will try swimming. One weekend for each spot, in a very limited zone.

Lennart: And then, is there already a promise or a deal that, if it’s successful that they’re going to continue with it?

Paul: There’s no fixed deal. As you know Brussels is still complex. We have to deal with both the regional authorities, but also with the communal authorities, and so on. So there’s still a lot of doubt in those, but the ambition of this test is actually to define rules and ideas on how to develop permanent places in the future. There’s no promise yet, but there’s certainly interest to follow this up in the future.

Lennart: So people in Brussels will be able to swim this summer, outdoors, albeit on a small, experimental scale.

Lennart: Okay. Well, great. Thanks for the update.

Paul: My pleasure, thanks for calling.

Lennart: So you can find all the information and sign up for Expedition Swim, at expeditionswim.be.

Mei: Great. So, moving on to our latest episode, just two weeks ago, we talked about what binds Europeans together. No news on that front, but I hope it did make you think about those institutions in a different way.

Mei: Moving on to what’s next. In this first season we focused mainly on producing quality content. Our next step though is reaching a much larger audience so we can keep on doing this, ‘cause we’re planning a new season later in the fall. No strict deadlines or release dates yet, just keep an eye on any of our channels. Listeners from around the globe have already contacted us about their projects, and we’d like to know what you want to hear about, and we’ll see if we can fit it in. So, send us your stories or ideas, and maybe we’ll feature them in a future episode.

Lennart: Of course, our first season isn’t going anywhere, so if you missed any of the previous episodes, just go back and dive in. And make sure to mention it to colleagues, friends and family so they can join us as well. So, that’s it for us this season, we’ll hear you in the next one.

Tomorrow People is made by Mei Van Walleghem and me, Lennart Schoors. Thanks again to Paul Steinbrück for his update, and we had some additional music by Lee Rosevere and Soft and Furious. Make sure to follow us on Instagram, Twitter or Facebook, or sign up for our newsletter so you won’t miss any updates in the coming weeks and months.